Why Raking on a Pitched Roof is a Bad Idea 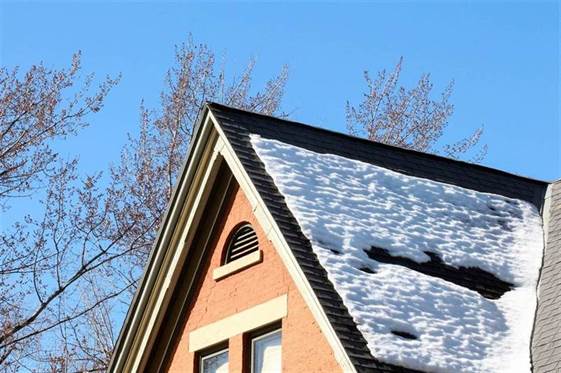 Winter is here, and you’ve started noticing a snow build-up on your roof. Naturally, you may start worrying about ice dams and roof leaks as a result. The most reasonable solution would be to climb a ladder and take away all the snow from the roof, right? Wrong! Here is why raking on a pitched roof is a bad idea.

Pitched roofs can handle the snow

Ever wondered why most roofs in snow-prone areas are pitched?  This is because every state considers factors such as the climate before enforcing the relevant building codes. Areas that receive heavy snowfall are required to have pitched roofs for a number of reasons. First, pitched roofs are designed to withstand at least 30 pounds of snow per square foot. This eliminates the probability of your pitched roof caving in due to the weight from accumulated snow. Secondly, the elevation from the pitched roof allows melted snow to easily flow to the gutters and be disposed of with minimum damage to the roof. As soon as the temperatures rise, the snow should melt off and flow by itself.

Raking the snow off your pitched roof may clear excessive snow, but in reality, it will not prevent ice dams from forming if you do not consider the proper preventative measures. Such measures include installing proper insulation on the ceiling and attic as well as providing ventilation between the roof soffit and the attic.

Climbing your pitched roof to rake off the snow may prove too much for your roof. Take a 200-pound man for instance. The pitched roof is designed to support up to 30 pounds of snow. This subjects the roof to an additional 170 pounds of weight. A new roof may support this kind of weight, but homes with considerably aged roofs may cave in when subjected to extra weight.

Climbing a pitched roof is a hazard in itself

Over the years, there are several records of people slipping and falling off from pitched roofs — apparently even during the hottest months. Snow-capped rooftops are twice as slippery. One misstep may be catastrophic. Additionally, the snow covers a lot of details from the naked eye; details such as the position of a skylight. A step in the wrong direction could make you cave in and land you in a hospital bed.

You can cause more damage

Raking your pitched roof without the technical know-how could cause more damage to the roof. There is the probability of over-estimating the snows thickness. As a result, you may damage the slated shingles or worse, you could do more damage by raking too much snow towards a weak spot such as a rotting section of the roof.

As the old saying goes, ‟prevention is better than cure”. Do not take matters into your own hands. For a more immediate solution, contact Winnipeg roof snow removal experts for a professional inspection of your roof. A roofing expert will safely remove the snow.